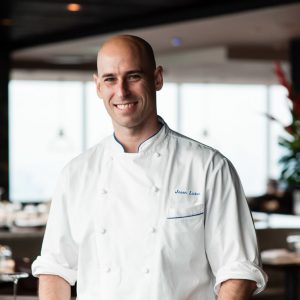 Jason Licker’s passion for pastry, life and travel has taken him across the globe for a true culinary experience.

His first internship was at Union Square Café in New York while training at the French Culinary Institute’s Pastry Arts Program.

Offering to work for free at first, Jason Licker earned a pastry cook position in the world renown Jean Georges Restaurant, an experience which prepared him for his first Pastry Chef position at Metrazur for Charlie Palmer at the age of 23.

Jason then opened the The Shore Club in Miami Beach where he was promoted to Executive Pastry Chef overseeing all Food and Beverage Outlets including Nobu Miami Beach, where Jason was first exposed to Asian Cuisine.

His win at Iron Chef Thailand is an affirmation of his elite Pastry status.

His latest project, Lickerland: Asian-Accented Desserts Jason Licker has reached the highest honor by receiving a James Beard Nomination in the category of Cooking From A Professional Point Of View, the only self published book in years to achieve this honor.